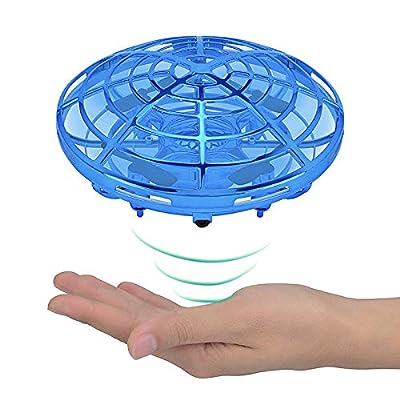 Price: $29.95
As of 2021-02-21 01:20:05 UTC (more info)
Product prices and availability are accurate as of 2021-02-21 01:20:05 UTC and are subject to change. Any price and availability information displayed on http://www.amazon.com/ at the time of purchase will apply to the purchase of this product.
Availability: Not Available - stock arriving soon
Buy Now from Amazon
Product Information (more info)
CERTAIN CONTENT THAT APPEARS ON THIS SITE COMES FROM AMAZON SERVICES LLC. THIS CONTENT IS PROVIDED 'AS IS' AND IS SUBJECT TO CHANGE OR REMOVAL AT ANY TIME.

THROW TO FLY: ACECHUM flying ball use high-tech motion sensors hover technology, inductive suspension and collision protection. The built-in gyroscope can control accuracy and sensitivity to make balance. You just need to gently throw the ball in the air, then it can start to fly immediately. WAVE TO CONTROL: The most amazing feature of ACECHUM flying ball is that the ball can fly in the opposite direction when your hands are close to it. You can use your hands to control it in the air for interactive play, super cool and super fun to use! HOVERING AND 360°ROTATING: ACECHUM flying ball has four power motor fast rotation to provide power to make itself 360°Rotating flying. There is always a high hover during the flight when flying to a certain level, grab the ball to flip then it will stop flying. RECHARGEABLE LED MNI DRONE: ACECHUM Interactive Aircraft has blue and green led to fly with two kinds of speed. The blue ball appearance design will emit bright shining and colorful effect when it is flying, It is really cool at night. You only need to connect it on a USB connector for 60 minutes to fully charge. Great fun toy! STRONG AIRCRAFT BODY: ACECHUM flying balls are made of high quality PP material that are very flexible and good enough to your kids, It is very sturdy and will avoid damage when it falls. And the ball will move away intelligently when it detects a solid object.